Laws to Keep in Mind While Tailgating

Are you ready for some football? As the season kicks into full gear, take a few minutes to catch up on some of the laws that could put a damper on your tailgating and game-day festivities.

State and City ordinances dictate where a person is able to consume alcoholic beverages. If you are over the age of 21, you can legally drink on your own private property. However, Baltimore City and Baltimore County prohibit the public consumption of alcohol on any public property such as streets and alleyways, and while in a motor vehicle. Being charged with an open container violation in Baltimore City can lead to up to $500 in fines, and a maximum sentence of 30 days in jail.

The exception to this law is that drinking alcoholic beverages on Maryland Stadium Authority parking lots—such as the one next to M&T Bank Stadium—is authorized on game days. But should you carry your drink down the street, you are at risk of being stopped and receiving a citation from a Baltimore City Police Officer.

Driving Under the Influence and Driving While Intoxicated 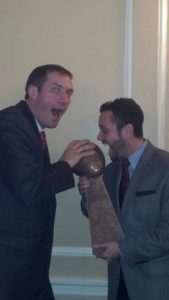 This is everyone’s goal a then end of January but only ENLawyers can get you there!

If you plan on drinking before, during or after the game, plan to have a designated driver or alternative method of transportation. In Maryland, the blood alcohol limit (BAC) is .08%, but this does not mean you cannot get pulled over if you may be under the limit. Maryland laws specify that police officer can charge a driver with a DWI if their BAC is .07% or higher, and the driver is clearly impaired and/or has failed field sobriety tests.

The consequences of being charged with a DUI or DWI in Maryland are severe—especially if it is not your first, or you were found to be heavily intoxicated while operating a vehicle. A first offense for a DUI can result in up to 12 months of jail time, license suspension, and fines up to $1000.

Excitement on game days, mixed with alcohol consumption, can lead to behavior that escalates beyond that which is safe. Laws regarding disorderly conduct allow police officers to arrest individuals who are participating in disruptive or offensive activities, or those whose behavior interferes with others’ ability to appreciate public spaces. Oftentimes when alcohol is involved, a person who is charged with disorderly conduct may also be charged with public intoxication. A public intoxication charge indicates that an individual has been found to be consuming alcohol, or shows evidence of being intoxicated, and exhibits behavior that is dangerous or disturbing to the public.

Both disorderly conduct and public intoxication are misdemeanor offenses in Maryland. However, they are punishable by up to 90 days in jail and fines up to $500. Further, when infractions or charges are combined, punishments may be intensified to reflect the offenses. So, while you are making the most out of pre and postgame activities, it is important to be mindful of your behavior and that of your friends, to avoid causing disturbances and being stopped by the police.

Tailgating is a great way to enjoy the football season, but too much fun can lead to charges on your record. Always arrange to have a designated driver or other modes of transportation if you plan on drinking, and be mindful of the local laws and ordinances before festivities commence. If you should find yourself facing charges resulting from taking the game day celebrations a bit too far, it is important that you seek advice from an experienced Baltimore criminal lawyer. For more information on Maryland open container, DUI, disorderly conduct, and public intoxication laws, or for a consultation regarding your specific case, contact the Law Offices of Eldridge and Nachtman today.