As all good Baltimore Criminal Defense Lawyers, we have often discussed the “other things” that go into providing the best possible legal defense to any criminal charge you may be facing.  Essentially we worry about the law (that’s our job) but it’s also our job to prepare you both mentally and physically for court.  The court is a stressful situation for anyone not accustomed to it.  We have said it numerous times before on this blog, whether it is courtroom appearance and attire, behavior, or not acting like a fool.  Despite the best efforts of your attorney, your own behavior can land you in 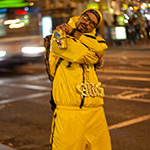 the slammer.   Which leads us to a perfect example:

In case you missed it, Chad Johnson (former NFL All-Pro wideout and reality TV dropout) was so happy with his lawyer during a Violation of Probation proceeding that he thought it would be cute to smack him on the butt.  While it might be appropriate on the football field it is NEVER, ever OK in a court of law.  The judge agreed with that thought and had him hauled off in cuffs for 30 days.  According to this USA Today article, he was recently released for writing an apology letter to the judge, but his original sentence was to only be to have his probation closed out.  Oops!  As a lawyer who regularly visits clients who are incarcerated, even a week in jail is a long time. 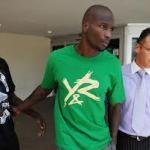 Bet Chad wishes he had kept his hands in his pockets after a week in the slammer!

Don’t be cute in court.  Leave any antics, jokes, or cute behavior to your lawyer.  Oh, and when your lawyer says to dress in court appropriate attire, think more like a nun or a priest and less like the devil or a vixen.  This isn’t Halloween or a club, don’t dress like it.  Be humble and show respect and you may get that break you’re looking for from a judge or a prosecutor.