Maryland lawyer: Complete coverage on how to survive Preakness

It’s the third Saturday in May and that means the 137th annual Preakness is back in town at Pimlico race track.  A race track that has seen champions like War Admiral, Seabiscuit and Secretariat has become better known more recently for the “running of the urinals” than being the second leg of the coveted Triple Crown.  If you have bought or planning on buying a ticket to the Infield for Preakness, your Maryland Lawyer would like to inform you of the crimes that rear their head like a 3 year old Colt and their consequences.

Maryland lawyer: It’s all fun and games until the handcuffs come out 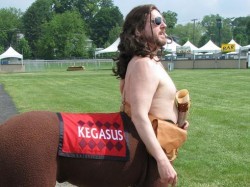 Over the years due to excessive fights, damage to the port-o-johns, alcohol abuses, and many people hospitalized, in 2009 the Maryland Jockey Club decided to ban the taking in of alcohol in a hope to stop the rowdy infield crowd.  In 2008, 126 fans were ejected from the infield while 6 were arrested.

The likely crimes coming out of Saturday’s Preakness

If you choose to take part in Saturday’s festivities and a one too many Black-Eyed Susans you might be looking at one of the following:

§ 13-1. Prohibited conduct – in general.
A person may not:
(1) be intoxicated and endanger the safety of another person or property; or
(2) be intoxicated or drink any alcoholic beverage in a public place and cause a public
disturbance.

Punishment: Any person 18 years of age or older who violates a provision of this subtitle is guilty of a
misdemeanor and, on conviction, is subject to a fine of not more than $1,000 or imprisonment
for not more than 90 days or both fine and imprisonment for each offense.

If you find yourself in the Infield as a member of the “mug club”, which is coming back for its third year, and things get out of control; think twice before you go all Metta World Peace  and throw an elbow at the guy wearing the Lebron jersey and the Yankees hat. If you happen to get into a skirmish (standing up for your first-place Baltimore Orioles) you might be looking at being charged with Assault.

(b) “Assault” means the crimes of assault, battery, and assault and battery, which retain their judicially determined meanings.

(1) creates a substantial risk of death; or

(ii) loss of the function of any bodily member or organ; or

(iii) impairment of the function of any bodily member or organ

One of the alternative traditions of Preakness has been the throwing of beer cans; whether in a fight or just doing your best imitation of Joe Flacco. Nonetheless, throwing a beer at a sporting event can cost you more than a sore shoulder.

This section does not apply to a member of a team or AN official participating as a principal in a sporting event while engaged in the course of conduct required by THAT sporting event.

(c) Prohibited conduct.
It is unlawful for any person to toss, throw, fling, or project, or to cause the tossing, throwing,
flinging, or projecting of any missile:
(1) on or in the direction of any member of a team or official participating as a principal in a
sporting event; or
(2) on any playing field or arena during the course of a sporting event.

This Maryland Lawyer would like to remind you that the “running of the urinals” is not considered a sporting event.

Your Maryland Lawyer warns against "Urinal Running" as an Ultrahazardous Activity

After the Preakness Stakes comes to a close

The crimes don’t stop after the winners circle, getting into your car after a full day of Black-Eyed Susan’s and bud light’s can lead to a Maryland DUI or a DWI. A Maryland DUI can lead to:

While a DWI (Driving While Impaired) can consist of:

Our suggestions to you for your Preakness day

Jimmy’s Cab Co. (Baltimore County) – 410-296-7200– The local cab favorite has been providing dedicated transportation services to the drunk and disorderly for years. They should be on speed dial like ENLawyers.

Shuttle bus service from designated Light Rail and Metro stations to Pimlico will run from 8:00 a.m. to 2:00 p.m. and will resume once the race is completed until around 7:30 p.m. Shuttle bus service is also available from Poly-Western High School at 1400 West Cold Spring Lane.