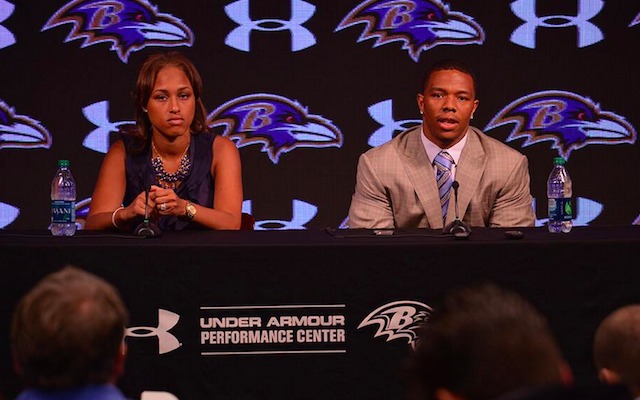 Just because he is an athlete doesn’t mean he is not entitled to the same rights as everyone else. Don’t make a decision without all of the facts.

Everyone has heard the phrase “innocent until proven guilty in a court of law”, but most people do not recognize this as an actual tenet of the American criminal justice system.  Most notably, Ray Rice’s recent arrest and suspension has stirred a debate on whether or not the punishment fit the crime.  We are not here to discuss the appropriateness of the sentence, but rather the notion of deciding one’s guilt or innocence before all the facts are presented.

Most everyone has seen the video of Ray Rice removing his girlfriend (now fiancée) from the elevator that has gone viral on the internet.  The video was not a flattering depiction of their relationship, but that video does not show what happened beforehand. However, what only a few people have seen is the video from the security camera inside the elevator.  Although we have not seen the video either, we cannot help but defer our judgment on Rice’s guilt or innocence until all the evidence has been presented.  Making a decision about a certain situation with only half of the evidence can only produce an uninformed opinion.  Even though athletes and celebrities are constantly in the spotlight, they too are given the same rights as every other person in the United States and are presumed innocent until proven guilty. This is a fundamental right within our system, and if you are, or were in trouble, a right you would not want abrogated. Look what happened to Richard Jewell. Everyone thought he was responsible for the bombing at the 1996 Olympics, and the media crucified him, and ruined his life. Yet in the end, after the investigation, he was cleared of any wrongdoing.

The NFL itself has its own rules and regulations.  It would be unwise for a person to voice their opinion with authority regarding the appropriateness of Ray Rice’s suspension without complete knowledge of the administrative aspects of the disciplinary committee of the NFL.  As fans of the NFL and not as participants in the disciplinary process, we are only told the final decision on players’ misconduct.  What we are not told about is all of the evidence regarding specific cases. The American criminal justice system decides its punishment in open court.  This is public record and anyone is allowed to inspect the court records.  Moreover, during a court proceeding, at least in jury trials, a person’s guilt or innocence is decided by a group of their peers, and only through a unanimous decision can a person be convicted.  The jury can only decide a person’s guilt after all of the evidence has been presented.

We at ENLawyers understand that we are ALL held to the standard of the American criminal justice system. We also understand that all people arrested or cited with a crime are innocent until proven guilty and must be convicted of their crimes through the use of evidence.  Without having all of the evidence presented, neither the attorneys, nor the juries, nor the Judges, can make an accurate decision as to guilt or innocence.  That is why when you are faced with criminal charges, you need a lawyer who will fight for your rights to ensure that you are given a fair trial.  Regardless of the crimes alleged, ENLawyers understands that you are innocent until proven guilty.  Call us for a free 1-hour consultation to discuss your case and let us help you when you need it the most.