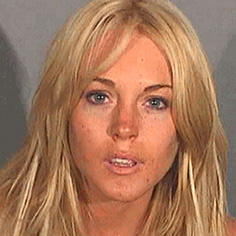 Lindsay Lohan clearly (and finally) got the memo regarding appropriate courtroom attire.

Maryland DUI: Obviously this guy didn’t get the memo…

A Blandburg man is in jail after allegedly showing up drunk Tuesday to his DUI hearing.

R__________, 52, of 155 ________Ave. was in Magisterial District Judge Fred B. Miller’s courtroom to sign paperwork to waive his preliminary hearing on driving under the influence charges for a May 26 vehicle stop when [Judge] Miller noticed that Franks smelled of alcohol.

The state trooper who initially arrested _________on Route 865 near Bell Tip and Grandview roads, walked outside and spotted an open 16-ounce beer on the console of Franks’ truck, prompting Trooper Craig Grassmyer to issue Franks a citation for having an open container of alcohol and Miller to hold a bail hearing.

Yeah, probably not a good idea to get sauced before your court appearances.  If you do, please recycle your cans; if you need to relax, find another outlet – like fishing.   Charged with a Maryland DUI?  Call a Maryland lawyer who will put you in the best position to exit the courtroom through the main doors, not the jailhouse doors.  Call ENlaywers.