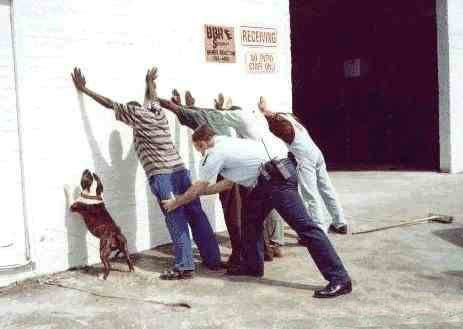 Dogs have rights to!

As a Maryland Lawyer, who practices criminal law, I am often approached by potential clients, friends or acquaintances, concerning the legal basis for a police officer to approach you and ask questions, or even search your person, belongings or vehicle.

Maryland Lawyer: What are my 4th Amendment Rights?

This blog post is not intended to provide insight into all of the Fourth Amendment protections against unreasonable search and seizures, but rather to address a topic that has gained traction lately. The question is whether a police officer’s observation of symptoms of alcohol use, drug addiction, or paraphernalia, commonly associated with the use or manufacturing of controlled dangerous substances (CDS), such as heroin, cocaine and marijuana, is enough to search your person, belongings, or vehicle? The simple answer is NO, but let me explain why.

Probable cause for a search, however, exists where the totality of the circumstances establishes a fair probability that contraband or evidence of a crime will be found in a particular place. Illinois v. Gates, 462 U.S. 213, 103 S.Ct. 2317 (1983).

Maryland Lawyer: So can I smoke a handrolled cigarette, wear ether-laced cologne, walk around smelling of Schnapps?

Now for the answer to the main question–The Fourth Amendment, and current Maryland law, do not allow  police officers to simply assert that apparently innocent conduct was suspicious to him or her; rather, the officer must state the factual basis upon which he or she bases the conclusion. Let me provide some factual examples from real cases that will help explain the law.

searches can often be quite intrusive

So, if you, or friend or family member, is stopped, searched or arrested, for what you may believe to be innocent behavior, contact your favorite ENLawyer, because we know how intrusive the police can be, and how to defend your rights in court.