One of the more recent cases coming out of the Court of Appeals of Maryland has drastically changed liability of Pit Bull or Pit Bull mix owners.  The Court has now imposed a standard of strict liability on the owners of Pits, therefore making them strictly liable for any dog bite or attack which harms another person, another dog, or property. Based on the opinion, owning a Pit Bull in Maryland is considered ultra-hazardous activity comparable to sky-diving or dynamite.

Most of the Maryland lawyer community is concerned about the civil liability, the implications on dog shelters, the practical applications of the law (hiring a doggy DNA expert?), and their own personal dogs.  But your Maryland lawyer is concerned about this change in the law and how it impacts the Maryland Criminal Law.  So if you’re Pit Bull pulls a Marv Albert , sinking its teeth into an unsuspecting acquaintance, this Maryland Lawyer wants to let you know there is a possibility an overzealous prosecutor or police could charge you with one of several crimes. 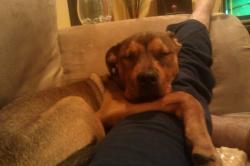 In the world of Maryland Criminal law there are generally two types of mental states (or mens rea in latin).  The first type of mental state is for crimes that are committed intentionally (i.e. murder, robbery, theft, carjacking, assault).  It indicates one purposefully acted to perform the crime is.  The second type of mental state refers to crimes that are not intentionally committed but rather were the result of reckless behavior (i.e. Manslaughter or reckless endangerment). This type of mental state is exhibited when a person acts in such an “inherently dangerous” way that the risk of someone either becoming injured or dying increases should be obvious to the person committing the act.  Several examples might include driving a car into a marketplace filled with pedestrians, playing Russian Roulette with a gun, or playing with dynamite around a group of small children.

Traditionally, people are not held criminally liable for the actions of their animal. However, upon further review of the Tracey opinion and the below described Maryland criminal law statues, you can see how an overzealous prosecutor could use the Tracey opinion to make an example of some unwitting pit owner.

If in fact, as the court would say, all Pit Bulls are inherently dangerous (the dog and the rapper); logic follows that the owner of a Pit Bull could possibly be charged with reckless endangerment for a dog bite.

It doesn’t stop with reckless endangerment; there can be animal cruelty violations as well. If your Pitbull injures another animal while training for the Westminster Dog Show.

(a)    A person may not: … (3) inflict unnecessary suffering or pain on an animal; (4) cause, procure, or authorize an act prohibited under item (1), (2), or (3) of this subsection;… (b)(1) A person who violates this section is guilty of a misdemeanor and on conviction is subject to imprisonment not exceeding 90 days or a fine not exceeding $1,000 or both. (2) As a condition of sentencing, the court may order a defendant convicted of violating this section to participate in and pay for psychological counseling. (3) As a condition of probation, the court may prohibit a defendant from owning, possessing, or residing with an animal.

Labeling the Pit Bull as an inherently dangerous breed (the Tracey Court uses the exact words, “Dangerous dog” as found below) opens up a Pandora’s Box of criminal issues. Now if your Pit Bull does its best Mike Tyson Impression…

(a) A person may not:(1) intentionally mutilate, torture, cruelly beat, or cruelly kill an animal;(2) cause, procure, or authorize an act prohibited under item (1) of this subsection; or (3) except in the case of self-defense, intentionally inflict bodily harm, permanent disability, or death on an animal owned or used by a law enforcement unit. (b)(1) A person who violates this section is guilty of the felony of aggravated cruelty to animals and on conviction is subject to imprisonment not exceeding 3 years or a fine not exceeding $5,000 or both. (2) As a condition of sentencing, the court may order a defendant convicted of violating this section to participate in and pay for psychological counseling. (3) As a condition of probation, the court may prohibit a defendant from owning, possessing, or residing with an animal.

A request by dog owners to have the Maryland General Assembly take up the issue in its special session fell flat a few weeks ago.  We will definitely see some legislative action come January 2013, but until then, Tracey v. Solesky is the law of Maryland.  Don’t forget, everyone is on a tight leash.  It’s not just the owners of these dogs that are liable; but could it be possible that the landlord can be held criminally liable if the dog is kept on their property with their knowledge.

So if you happen to be the owner of an American Pit Bull Terrier or crossbreed, before you take them out for a walk be aware of potential consequences that may arise from a bloody situation. And remember if you end up on the wrong side of the law do not answer any questions; ask to speak to an attorney and call ENLawyers right away. Additionally, we can now affirm that Maryland Lawyer Jeremy Eldridge, who has been called a pit bull in court, is inherently dangerous.