A huge thank you to our partners Maisy’s Restaurant & The Baltimore Florist for making such a great contest possible.

The trash men had not been able to get to our neighborhood for about two weeks! Can you say “a lot of trash!”

We kept the trash out on the deck so we could get to it easily. We came up with the bright idea to take the trash cans through the house because the snow was up to our knees. My husband took the first can and I was trying to be a team player so I got the next one. I was dragging it through the house when suddenly I saw my curtain in my foyer move really fast! I said, “wow Star (the cat) was really excited”.

My dream night went from good to a nightmare!

The biggest rat I’ve ever seen came running out from under the curtain-like he stole something! I ran through the house screaming at the top of my lungs “a rat,a rat!” My husband came running in the house and told me I was lying. He then ran like a mad man cursing and tearing up the house in search of the rat! Meanwhile, I’m sitting on top of the island crying. I had to help, but I couldn’t get down, so I got the phone book and called animal control (it’s 12 midnight now!). 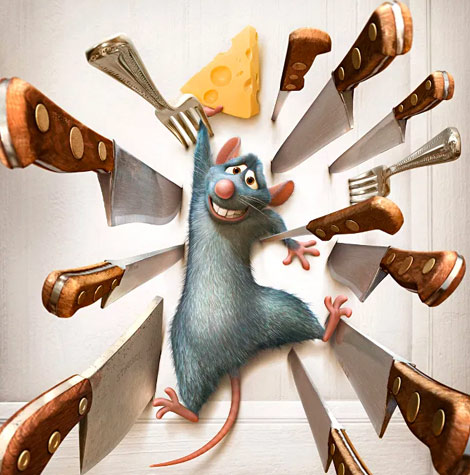 Not this nice and much bigger!

I thought animal control was the answer to my prayers until the guy said it would cost $400.00 and he only took cash.

I didn’t even say bye, I just hung up! My husband opened the powder room door and the cat came running out like she saw a ghost; my husband still didn’t believe me until he went back to the powder room door and opened the door again…out came the biggest rat you ever wanted to see! My husband screamed and proceeded to chase the rat around my house! I flew down to the basement and locked myself in there, only to hear my husband tear up my upstairs! He was such a nobleman that night, he was doing everything he could to bring the giant rat DOWN! You would have thought he was fighting a person.

I could hear him telling the rat “you came up in the wrong house tonight!” and that’s the clean version.

Then I could hear the rat screeching and making all kinds of noises! My husband was saying “I got you now!”  He called for me to come and bring him a bag. I had to man up and take it to him……I threw the plastic bag at him and ran! After he finished off the rat, we were too tired to finish our night. Plus, he smelled like he had worked all day in the hot sun. So my advice….never take the trash through the house I don’t care how high the snow is!