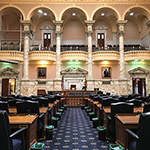 (and the Senate) for this Maryland General Assembly session!

Now, we are starting it all over again, but this time there are several different topics up for discussion.  Here is our 2013 watch-list and ENlawyers odds of passing.

Stay tuned to your dials folks, as this General Assembly session will be sure to be a bumpy ride!  Oh, and here are some things you won’t see: legalized marijuana, mandatory interlock for first offenders, and changes to the implied consent statute covering submitting to a breath sample when arrested for suspicion of DUI/DWI.  While we’re not lobbyists or soothsayers, as your Baltimore Criminal lawyer and small business lawyer, we do want to keep up to date on the new laws and changes; so call us with your legal problems!